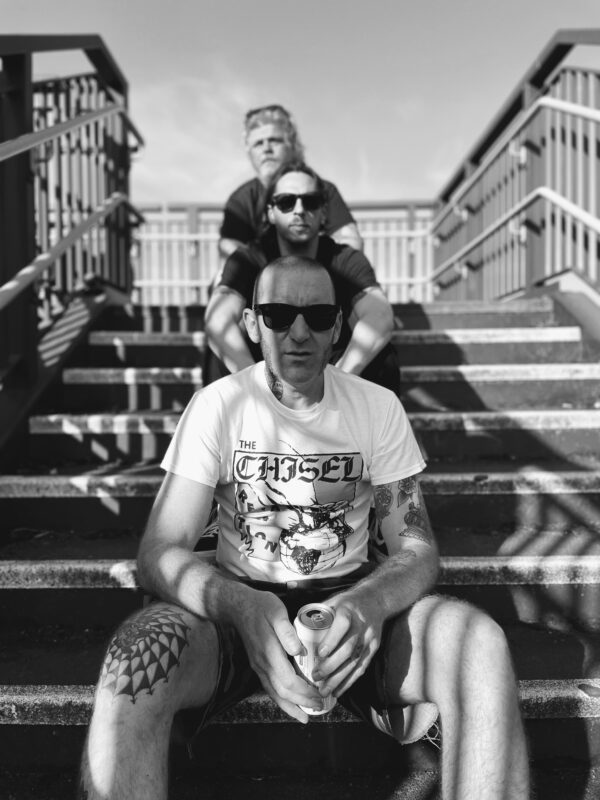 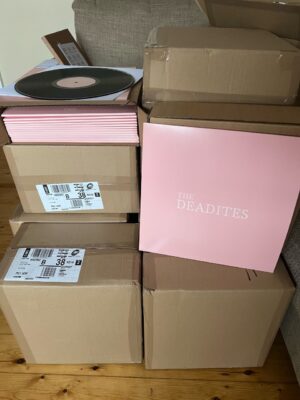 While we spend most of our collective spare time organising and running our DIY Punk gigs, we also sometimes manage to squeeze in some time on something even more ambitious.  Over three years ago now we released our first ever record as Scary Clown Records, and we’re now proud to say SCP0002 is released; DEADITES II by The Deadites.

The album was nearing completion just as the pandemic hit, which scuppered planned meetings with the band – so everything went on hold for a bit until we realised the lockdowns weren’t going to ease up for some time.

So somehow we managed to produce a slab of vinyl for the band without physically meeting up!  We should be taking delivery of the physical copies next week.  The band has produced their own insert, with photos and song lyrics. We’ve been big fans of the Deadites for MANY years – their songs are heartfelt and uplifting – and have the unique laid-back yet energetic sound that defines the Deadites for us.

Probably the most under-rated bands in the DIY scene – they have played MPF and more SCP gigs than any other band (probably on par with Wonk Unit), and while few have probably heard of them outside the local area, touring bands who play with them are always blown away.  It’s time we helped our first label’s band get out there and heard.  They are the loveliest chaps – they’d probably play for chips*, they just love playing their music in front of good people.

You can order your copy in our shop (£12 plus postage), or try and get to a gig and by in person – The Deadites will be playing our big Skate-aid 8 all-dayer.

*they probably would like me to clarify chips & cash!

Here’s a couple of tracks from the album to sample…

×
Update Required To play the media you will need to either update your browser to a recent version or update your Flash plugin. 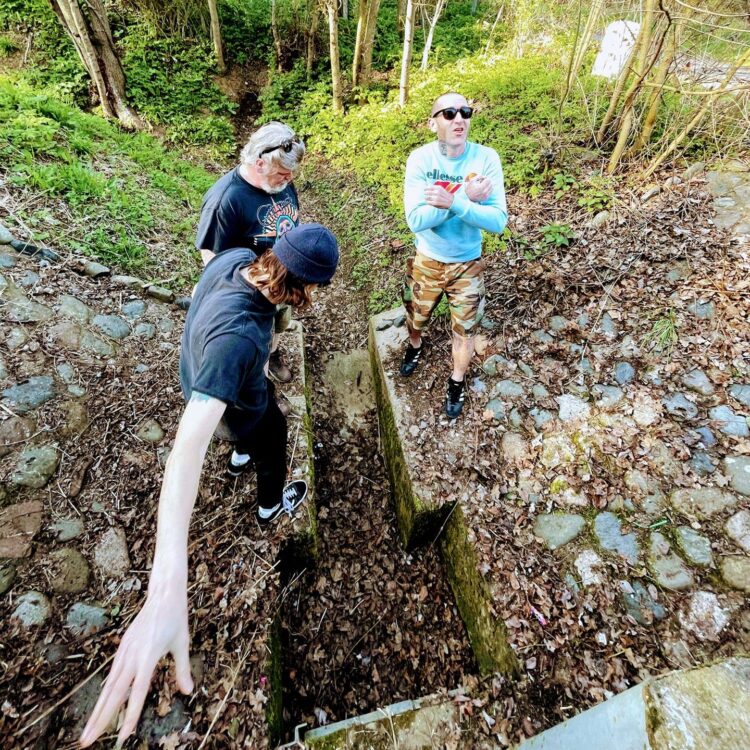 The Deadites, the first band signed to Scary Clown Records

Well the last two years have been a bit different, haven’t they?  The good news is we’ve had some fantastic (sold out) gigs in 2021 once venues opened up again.  You like us and the bands were very ready for some live music and fun.

Our Xmas party gig with Bar Stool Preachers and Grand Collapse is sold out a week before it happens, which has never happened for a gig mid-December for us before.

Thanks to everyone who supports us and comes to the shows, our following seems to have grown to the point we can really fill up Mama Lizs with great people (and Tucker).

We’re already planning shows for 2022 – including our half-dayer Punk Rock BBQ, and of course our biggest charity fundraiser of the year, Skate-Aid 8.  Bands are being booked up as I type.  Check out our tickets page for what we have on – we already have the Diaz Brothers coming to Mama Lizs, and a free entry show at the Ostrich Inn penned in. 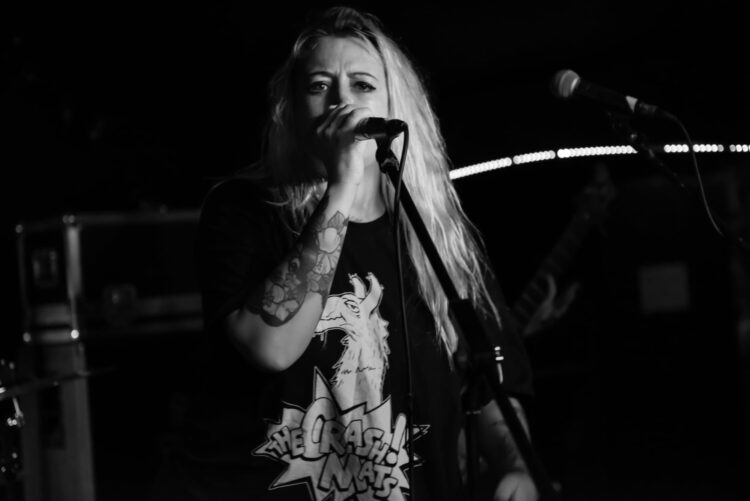 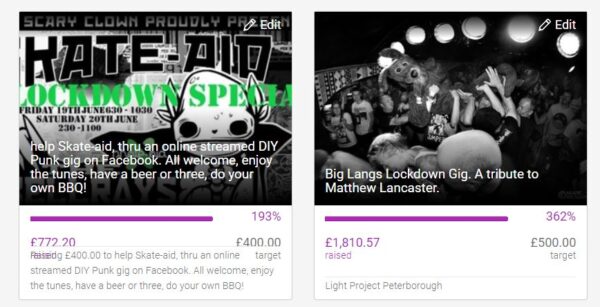 We justed wanted to say thank-you to everyone who has attended one of our enforced ‘streamed’ gigs this year.  Both have been massive successes – even though we couldn’t come together as planned.  Damn that pandemic!

Still you helped us raise a huge amount of dosh – way more than we ever imagined would be possible – we all should pat ourselves on the back and feel warm and fuzzy!

Skate-aid will be receiving about £750 – and we donated over £1,800 to the local homeless charity after the special gig in honour of our lost mate Bomber. 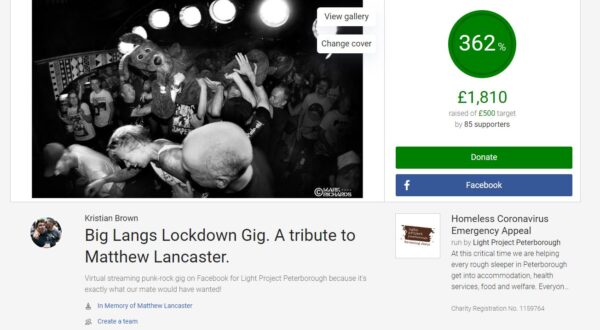 As we couldn’t put on the two day punk ‘festival’ we wanted to due to the coronavirus pandemic, we instead took a gig online – a live Facebook streamed event over two evenings.

Much fun was had by all – with over 160 people watching during Duncan Redmond’s set.  We also had Alex Wonk and Dan from the Spoilers join us – who were both regulars playing Scary Clown gigs.

We raised money for a local homeless charity – and were blown away to raise over £1,800!  Thank you to everyone who could donate. 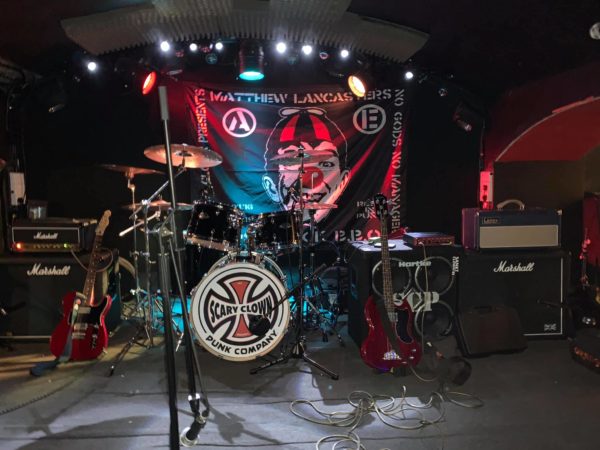 Well our final Scary Clown Presents gig of 2019 was a total banger – the much-needed return of those mad chaps from Pizzatramp topped of a five band Xmas gig of much fun.

Don’t tell Pizzatramp, but we feel that Brassick may have stole the show though – their first visit to Mama Lizs for one of our gigs, and they blew most of us away!  We got a lot of great feedback from regulars about their set of full on hard-core.

So we’d like to wish everyone a very merry Xmas – let’s ignore the coming end of time with the totally crap election result of that total fuckwit Boris Johnson and his band of cunts.

On more positive news the new SCP drumskin with our new logo (possibly inspired by a skateboard brand) looked smashing on stage – the white really helps it stand out.  Lovely.

We’ve got lots of gigs planned for next year, including Skate-aid 7, and a very special TWO DAY punk festival in honour of our much missed Matt Lancaster.  #punksdontdie 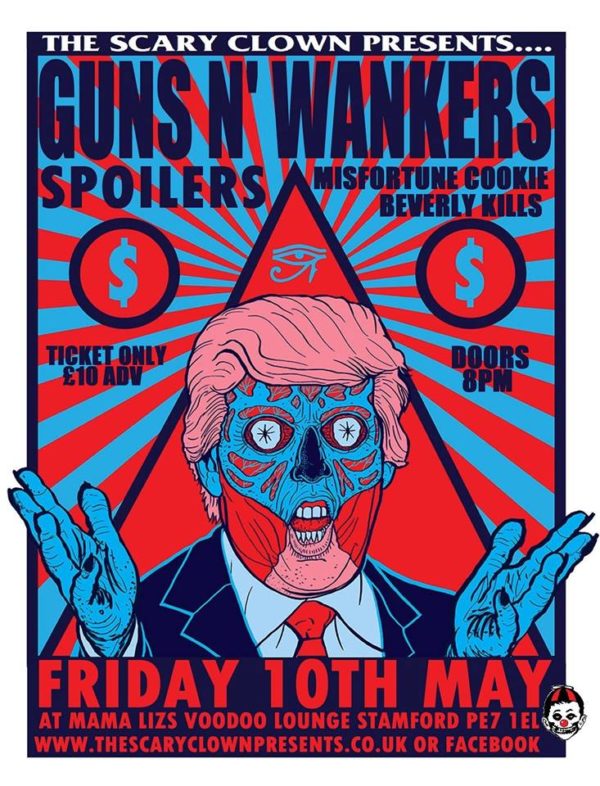 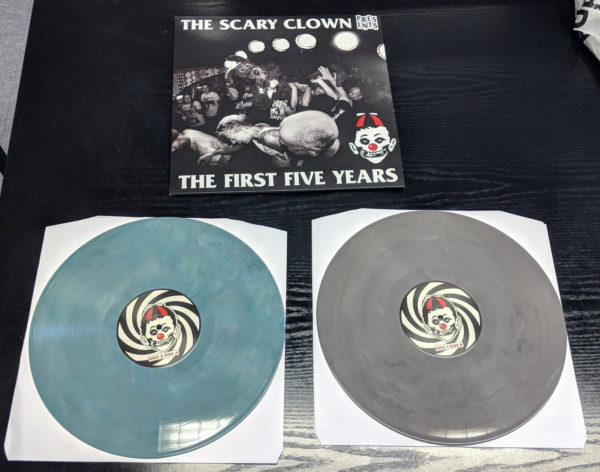 Well we are bloody well doing this!  The Scary Clown Presents… has pulled together 33 tracks from 33 bands to make our dream come true, a double vinyl album featuring bands who have all played our gigs over the first five years.  There are more we’d loved to have included, but there was limited space (82 minutes all in) – so it had to be first come first served.  We are VERY pleased with the results, thanks to Matt Cade for putting together the vinyl mixes for us, and Aston at Boss Tunage for getting the manufacturing sorted.   These things do take time – we hope to have the physical copies end of Jan, hopefully for our Airstream Futures gig on 27th Jan at Mama Liz’s.  We will keep people informed of course!  The DIY Punk album features some never before released tracks, including one from Wonk Unit, the undisputed kings of our scene.  We even had some bands go into the studio to record something special just for us, not just here in the UK but also in the USA!

Check the video below – it may well feature an exclusive track from the album… those crazy Pizzatramp boys!