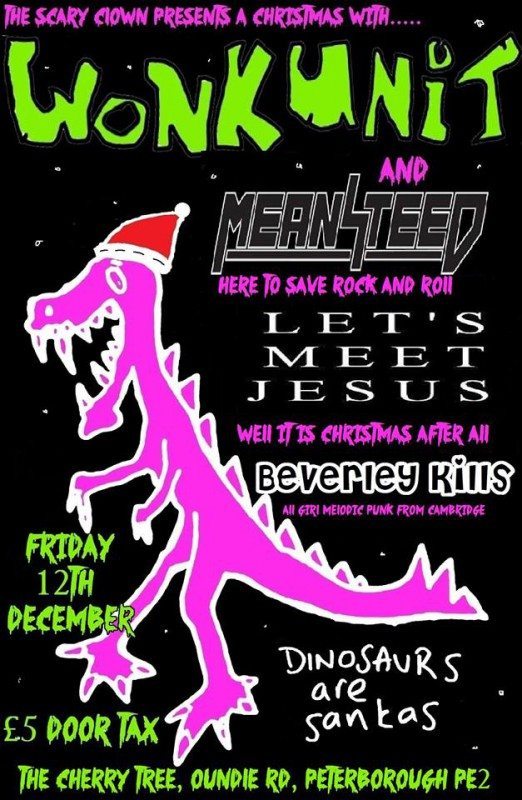 Ok so true to form we have a last minute problem. Lets Meet Jesus have had to pull out due to reasons totally beyond their control. They’re totally gutted at missing the night so send them some xmas love. We do however have a line up replacement in One Nation who are an ace Boro band and rapidly becoming Scary Clown faves!

Sooooo a little word about a very VERY nice man. Sometimes when things get a bit tricky certain people step up to the mark and help out or do a bit to encourage or show some support and so on. Then there’s Daniel Spense. Undoubtedly without Dannys help this night might not have happened at all, so if you see the big guy with the tattoos doing the sound show that man some love. Better still go download his bands xmas song for a measly quid. Schweet! http://fizzyrecords.bandcamp.com/tr…/its-christmastime-again

All tickets are now gone but we may have a couple spare from cancellations so drop us a message on our Facebook page if you missed out but still wanna come.

To all you with tickets, see you in the mosh pit!  And remember, it’s at the Cherry Tree pub in their function room.  Do not go to the Attica VIP (which has closed down). Hey wassup folks? Me and the G Man had a blast at the River Jumpers show! Was a great night all very good natured with that friendly vibe that we pride ourselves on. We thought both GUTS and One Nation were great and are pretty sure we’ll be having them back on in the very near future. Great to see some young AND local talent on the stage belting out some solid up tempo punk rock tunage. For me A Great Notion played the best set I’ve seen them play, loving the vocal harmonies and the new material. Jordy assures me their tightness was down to them being sober…… maybe it was down to me being hammered? Either way check em out if you havn’t seen em for a while you won’t be disappointed. Also go check their Faceache page as they have a Kickstarter project up and running, well worth supporting we reckon! Talking of not being disappointed, River Jumpers played a wicked set. Tight, melody driven power pop punk played with infectious enthusiasm that got the Lounge buzzin’. We loved their set and look forward to seeing these guys again. If you missed em go download their album from their Faceache links. You won’t be disappointed. Becky seemed to have a good Birthday night and let the River Jumpers guys lose with the tattoo gun. This seems to be becoming a bit of a tradition. Becky puts the band up – the band tattoos Becky. Seems reasonable.  Ah then the hangover came….. Ooooffff it was a goodun, worthy of the night.

Next up is the anniversary show for Scary Clown 1 year down and we are very very excited about the line up. The Amsterdam Red-Light District headline and if you’re not familiar with their sound go check the links on their Faceache page. Expect incendiary live performance of high energy rock tinged hardcore punk from these Lyon based dudes. We are gonna lay some alphabetti spaggetti on em to prove that our cuisine easily matches anything our Galic cousins have to offer. BON! Also Very excited to have Petrol Girls playing. The Petrols have been touring fiercely of late and winning rave reviews here and in Europe. If you haven’t checked their ep you should go and do so immediately. Probably one of the most exciting new bands emerging outta the UK currently. Win:Win.
We also have Soviet Films playing with their own brand of Apocalyptic Post Hardcore tune smithery and I gotta tell ya last time I saw these boys they were well impressive. Flip a damn fine burger too! We’ll also be welcoming back The Deadites who played our first show who will be featuring Pete from Soviets on Drums as James is still away. Back to back sets for Pete, that’s gotta hurt. Kickin the night off will be foot stomping folk punk shout along merchants Bandit The Panther. Hey thats a line up! Still only a fiver and also my Birthday so watch me drink myself into a stupor at the same time. Does it get any better than that? Win:Win:Win:Win:Win.
See you on the 25th October Oui?