GET IT IN YOUR DIARIES – PUNK ROCK IN A PUB + VEGAN MEXICAN FOOD! 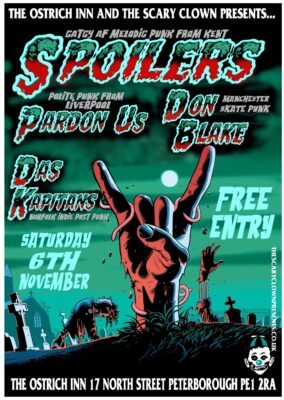 Saturday 6th November, 7pm (pubs open from 12 so just come early and enjoy!).
Vegan eats by Taco’s and Flip Flops – amazing Mexican grub available at the pub, so eat and drink and be merry!

Stamford gigs are great, but it’s a bugger to get to, and there are very little places to stay if you’re traveling to a gig – we get you – so we’re paying back our regulars with a bit of a special free gig – this one is on us!

Those Kent smashers Spoilers [bandcamp] totally blew the roof off when they played the Ostrich last time – people were literally bouncing off the ceiling – it was one hell of a gig!  They love playing to you lot, and apart from Wonk Unit have probably played the most SCP gigs.  Pardon Us [bandcamp] return all the way from Liverpool – for a ‘newish’ band they’ve certainly put out some stunning albums, and they are totally lovely people too.  Don Blake I believe played a very early SCP show – before I joined the collective – but it’s long overdue that they join the party, bringing their melodic skate punk down from Manchester [www.donblake.co.uk].    Opening the night of music will be our local [ish] band Kas Kapitans have been spending 2021 putting out 12 albums!!!   And they are blinking good!

So this gig is totally free – we’ll probably kick off about 7pm – bring money* for drink and merch – buying something from a band really does help them out! * the bar takes card and cash, but bands normally need cold hard Sterling!

Venue:  The Ostrich Inn is our favourite city center boozer – it’s a ‘local’ pub, with proper characters behind the bar.  It’s probably the worst shape for a gig ever, but the owner landlords have put in a stage area, lighting, PA and sound mixer, and you know what, gigs do work there.  It’s as intimate as you’ll ever find!  We’ve had far bigger names in the pub that anyone would ever think, and had some right rowdy nights!  They do great real ales, some craft keg beers, great gins, and hot pies.  It’s not a foodie pub, but you’re in the town center with lots of other grub choices nearby.   There’s a decent-sized car park opposite the pub entrance.  Also a cracking small beer garden out back.   IT WILL BE RAMMED FULL on the night, our gigs always are.