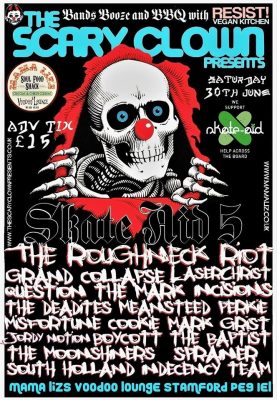 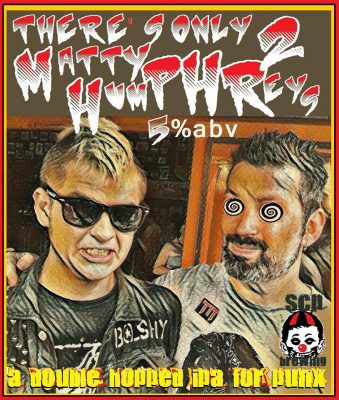 ung the date in your diary.  As always our Skate-Aid 5 charity fundraiser gig will be a full day of DIY Punk off all types, vegan BBQ, a unique beer brewed for the day (a 5% session IPA called “There’s only two Matty Humphreys”), and a lovely family friendly atmosphere.

UPDATE:  Unfortunately the USA’s Remnants have had to cancel their entire UK tour – so that includes us.  Never fear, we are talking with several possible big band replacements as you read this!

We’ve pretty much multiple headline bands going on – but one of the very best bands on the scene today, the Roughneck Riot top off an amazing line-up.   Full line-up complete.

THE ROUGHNECK RIOT – we love em, you love em, tight political folk punk to make you dance!
GRAND COLLAPSE – Frantic Hardcore Punk from Wales currently making big waves across the scene
LASERCHRIST – Straight outta Crofton. Leatherface and Iron Chic meet The Smashing Pumpkins and Pixies through the door of Kukundu.
INCISIONS – they were so good last time, we had to get em back for more!
THE DEADITES – local heroes return
MISFORTUNE COOKIE – Former members of Southport/Bear Trade join forces with Helen Chambers.
QUESTION THE MARK – no gig is complete without a noisy welsh punk band!
PERKIE – back with her moving acoustic set
MEANSTEED – a rare acoustic performance from everyone’s favorite rock-n-rollers!
BOYCOTT THE BAPTIST – bloody loud grindcore madness, these boys been touring the world making ears bleed!
THE MOONSHINERS – the first appearance at a SCP gig for the local Polish punksters
MARK GRIST – Peterborough’s own poet and battle rapper
JORDY (A great notion) – Peterborough’s own sing-along legend bringing his acoustic guitar
SPRAINER – probably the first outing for this new Pboro band which includes Will Hart
– HAD TO CANCEL LAST MINUTE DUE TO DRUMMER QUITTING!

Lunch Time Session (down in the voodoo lounge main venue)

Acoustic Set (upstairs in the restaurant with small vocal PA)

Evening Session (down in the voodoo lounge main venue)